The spring frenzy may be over but one agent believes prices will hold firm through fall
By Andrew Lupton, CBC News 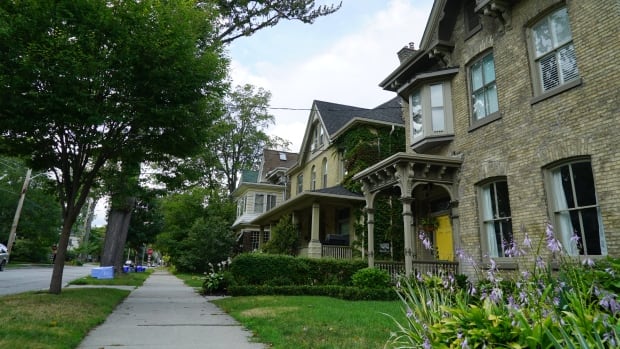 London’s market appears to have calmed down since the spring, when sales totals snapped a string of records in each month from January to June. (Paula Duhatschek/CBC)

The surge in both sales and prices began last fall and culminated in what one agent calls a “crazy spike,” one that took some of London’s most seasoned agents by surprise.

Each month from January to June, the London and St. Thomas Association of Realtors (LSTAR) reported sales totals that smashed records stretching back to 1978 when it began tracking sales data.

The high water mark came in May, when LSTAR reported 1,539 homes were sold, an increase of 33 per cent over the same month in the previous year. June continued the run of record-breaking months but the place began to slow with 1,245 sales, a jump of 10 per cent from the previous June.

Beyond the ‘Toronto factor’

London prices were forced upward — in part — by what many called “the Toronto factor.” As home prices in Canada’s largest city rose a jaw-dropping 33 per cent in March, many were looking for more affordable options.

Real estate agents who work outside the local area are required to register with the local board before showing clients properties.

LSTAR president Jim Smith told CBC that a total of 371 agents from other jurisdictions registered with his board this year. It’s an indication that many out-of-town buyers are locking in on London.

“You had these Toronto people who were cashing out in the spring when things were going nuts there, they were coming to London. They were coming down the road. It was almost like a trickle-down effect.” 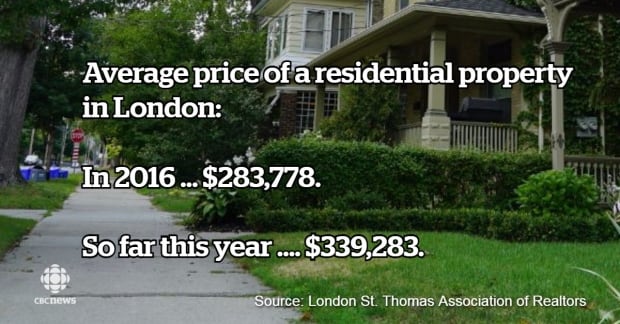 Smith believes the rise in Toronto prices threw a spotlight on London as an affordable option.

And while agents weren’t complaining, many would prefer to see more balance in the market.

Peter Meyer is a broker with Royal Lepage Triland. He uses a weather analogy to describe what happened to London’s real estate market this spring.

Smith heard stories about properties that drew 20 bids and purchase offers that topped $100,000 over the asking price.

“There were wild stories,” Smith says of those heady days of spring. One involved an agent who hired a school bus to take buyers to a subdivision in St. Thomas. “That’s how crazy it was.”

Then things came back to reality.

Toronto’s market dropped dramatically over the summer, where sales were down about 35 per cent in August compared to the previous August. However those same numbers also show that year-over-year August prices appear to be up slightly from 2016, not down. 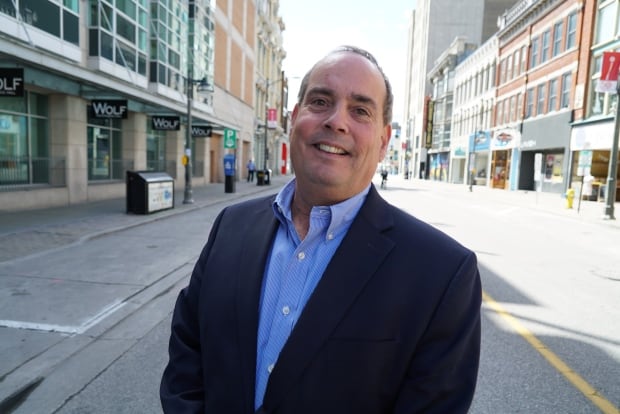 Jim Smith of the London and St. Thomas Association of Realtors says 2017 continues to be ‘an incredible year’ for real estate in London and its surrounding areas. He said many buyers continue to relocate to London from the Greater Toronto Area. (Andrew Lupton/CBC)

Here in London, LSTAR reported average year-to-date sale prices in the region of just under $330,000.

“I lost out on two deals last weekend because of multiple offers,” he said. “They’re still out there but they’re not happening with the frenzy that we saw in the spring.”

Both Smith and Meyer believe that even if London’s real estate spring fever is over it will evolve into a more balanced — but still very robust — market heading into fall.

“I don’t believe there will be a correction,” said Smith. “I think this is the new world order here in London. Because of the fact that we’ve been so low compared to the rest of the province, let alone the rest of the country.”

Good value over other markets

Here’s how London’s average sales price stacks up to other markets in southern Ontario. These are average sale prices across all residential types, reported by local real estate boards:

Meyer said he believes London real estate remains a good investment, particularly for buyers in it for the longer haul. He advises both buyers and sellers to not be overly influenced by the market’s peaks and valleys

“The market is not made up of two months,” he said. “The people who bought in the frenzy trying to flip, they might end up with the short end of the stick. But buying for long period, things are going to balance out. Real estate has a tendency to balance out over time.”

And what about the next few months? Smith believes local prices will continue to hold firm, and possibly edge up higher.

“We’re going to have a strong fall,” he said. “Our market is strong and vibrant right now. I see it continuing right through to next year. We’re not done catching up I think.”